We traveled over ten thousand miles to experience life on the edge in Singapore. 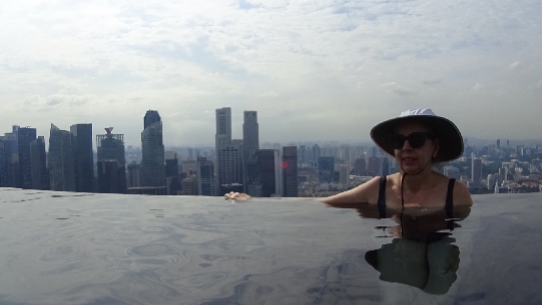 This infinity pool tops the Marina Bay Sands Hotel . It is fast becoming the trademark of Singapore. We spent three nights in this hotel.  Night is when Singapore really shows off!

This hotel and the adjoining Marina Bay Gardens were built on land reclaimed from the sea.  The hotel includes a luxury shopping mall, casino, theatre space,and art gallery exhibition space.  The building itself is an engineering marvel, built to withstand typhoon and earthquakes all while supporting an infinity pool at the 55th floor that unites three separate towers.  Each tower has two curved sides that meet at the 23rd floor.   Art works are an integral part of the building design.

This is the view from our hotel room. 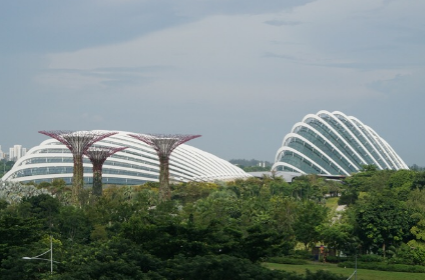 Marina Bay Gardens contains two massive conservatories.  One creates a cloud forest environment with the world’s tallest enclosed waterfall.  The other contains the largest glass enclosure in the world,  home to signature plants collected from all parts of the world. These spaces are cooled by chilled water circulating in the floor.  Humidity is removed by lithium chloride which is recycled by burning biomass from the gardens underground and releasing the hot air from the conservatories through the decorative “super trees”  which hold solar panels to light them at night and provide electricity to cool the domes.These three are only a few of more than fifteen. The glass in the domes is spectrally- selective with light sensor operated shades.

Singapore is exciting.  In less than 300 sq miles almost 6 million people crush together seemingly all bent to corner the world as a transportation and shipping hub.  They are currently # 2 in the list of container ship ports (bested by Shanghai).  The size of Singapore is deceiving because vast tracts of land have been set aside for parks which creates the second densest population in the world.

While the airport is far from the biggest today, in 2018 the airport will double in size with still another terminal coming two years later.  Again, land for these massive projects is land reclaimed from the sea.  The airport is a curious departure from tiresome passageways and gates.  Major art works are part of the design as well as fish ponds, pools, and butterfly gardens.  Even a swimming pool to relax in during a long layover.

Singapore is pulsating with activity 24 hours a day.  It is reaching out and up and down.  It is draining and claiming sea bed. Skyscrapers reach new heights desperate to a cut a different figure.  Tunnels are being created under the water to connect more subway systems.  All this, while ships continuously lineup to discharge and reload cargo.

We return in December so I am sure we will discover new sides of this exciting destination.  We are now traveling in Laos.
Until later,