Back in 2009 in Guatemala, Larry and I met an Army helicopter test pilot from the US.  He told us about a major gliding center in Omarara, NZ.  He described flying over lakes and mountains that were scenes from Lord of the Rings.  We knew then that this was the place we wanted to visit.  That was what put New Zealand on our radar in the first place.

We arrived in Omarara on November 23rd and Larry began a 2-day  course to become a pilot.  It was important to him to man the controls, adjusting the speed and direction to find the thermals and cruise up to the ridge lines to look for more thermals.  I just wanted to feel like a bird soaring up and up and up!  Omarara Gliding Center was a buzz of activity because Regional Competitions were underway and some fifty gliders were there to get the best scores on 3 of 8 days.  Naturally, we planned ahead and had already reserved pilots and instructors.

Funny how life happens.  Larry is off with his instructor while I am sitting in the lobby, minding my own business, awaiting a late afternoon flight (the best time to soar, by the way).   Four people filed in, said they were the next of kin?, were there to be debriefed on what was known of the crash? AND understand the last moments (what last moments???).  After they file off to the briefing room, I  asked the receptionist as tactfully as I could muster, what happened.   She said that a fatal crash had just happened with an experienced pilot and the cause had yet to be determined.  I filed that away and prepared for my flight.

Mike was my pilot, a 70-something Brit who loved flying ever since he saw planes flying over Britain during WW II.  For the last decade he spends 5 months a year here flying gliders and running the aero-tows.

Aside:   What is an aero-tow?  To get a glider up in the air you have a small a single engine plane with a long rope attached to the front of the glider.  The plane takes off and pulls the glider into the air.  At about 4,000’ the glider pilot releases the rope and soaring begins.

I put on the parachute, yes the parachute, and climbed into our Duo Disco (the world’s best training glider).  I am in the front seat with the pilot behind.  My only job is to retract the wheels after take-off and lock them in place and at the end of the flight lower the wheels down and lock them in.  Every moment between these points was an absolute rush.  There is nothing I have ever experienced that is anything even close (sorry Larry).  It was exhilarating, beautiful, amazing!   I immediately realized this experience was worth any risk or Larry becoming a widower.

The conditions were right as often they are in this valley in central South Island.  NWesterlies come in strong and the clouds melt away as the thermals heat up.  By 1 PM the thermals are strong making it a short tow by the plane.  We jettisoned the tow at the first ridge and we circled rising around the thermals to get above the mountain tops, over 6,000 feet, then we cruised to the snow-capped peaks to check out those cold, sharp jagged rocks.  Here we cruised and started climbing again on the thermals to above 11,000′.  We never rose high enough to need oxygen, though  it is necessary above 13,000 ft.

I was at 8000 ft when taking this picture.  Mount Cook is in the background. 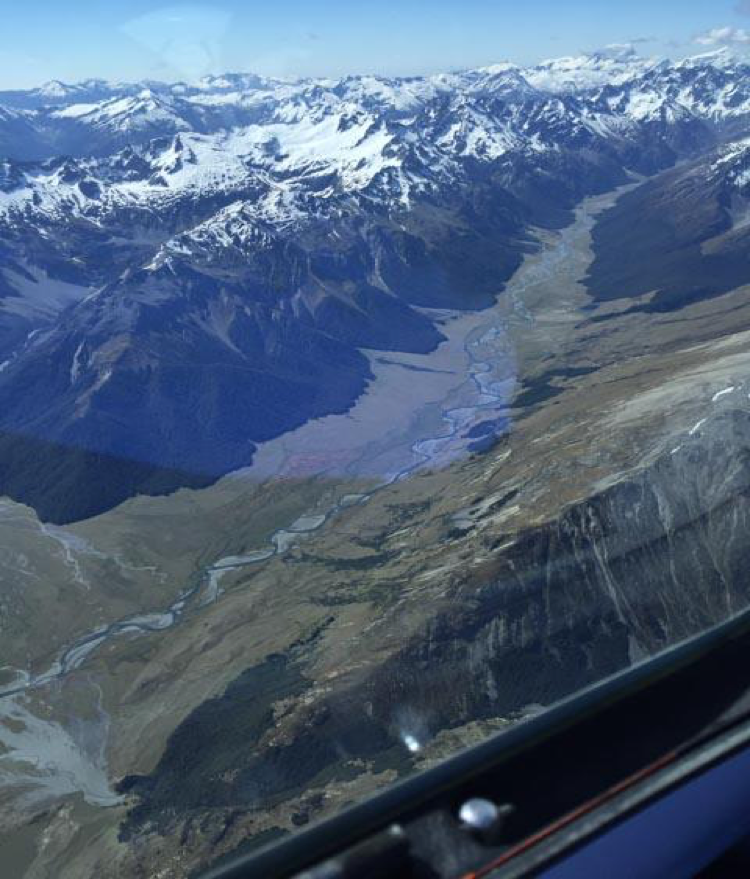 Clouds take on a real importance when gliding.  You want a flat butt on the cloud because that is where the water vapor is condensing and you can tap into the energy and get greater height.  It is such a wonder to soar under a cloud, the coolness is an immediate relief from the sun on the plexiglass. A cloud that is ragged and falling apart is no good to a glider. No energy to tap.  You look at the sky and determine where to gain elevation (which is a good thing) and head for it.  What a concept!

Here I am coming in for my landing after an almost 3 hour flight!   Hard to believe you can stay aloft that long.  Mike, asked me if I wanted to try a 360 before we landed.  I hesitated about a nanosecond before Yes..  How many times do I get to fly in a glider and do a flip?  It was fabulous.  You feel a slight g force and your stomach lurches a bit and the world turns upside down and then right side up before you know it! 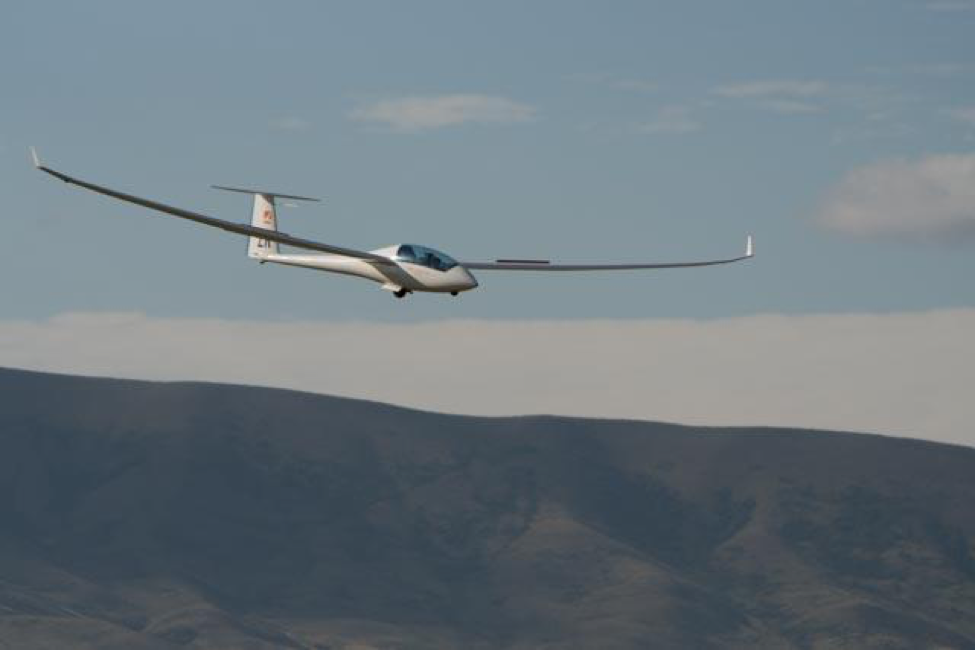 Martin, my  second pilot is from Austria.  There he has stayed aloft for ten hours.  My ride with him was also great.  We passed closer to the mountain tops.  We saw the frozen lakes up in the mountains, clouds coming in from the East like a blanket, low and flowing over the ridges like a liquid. 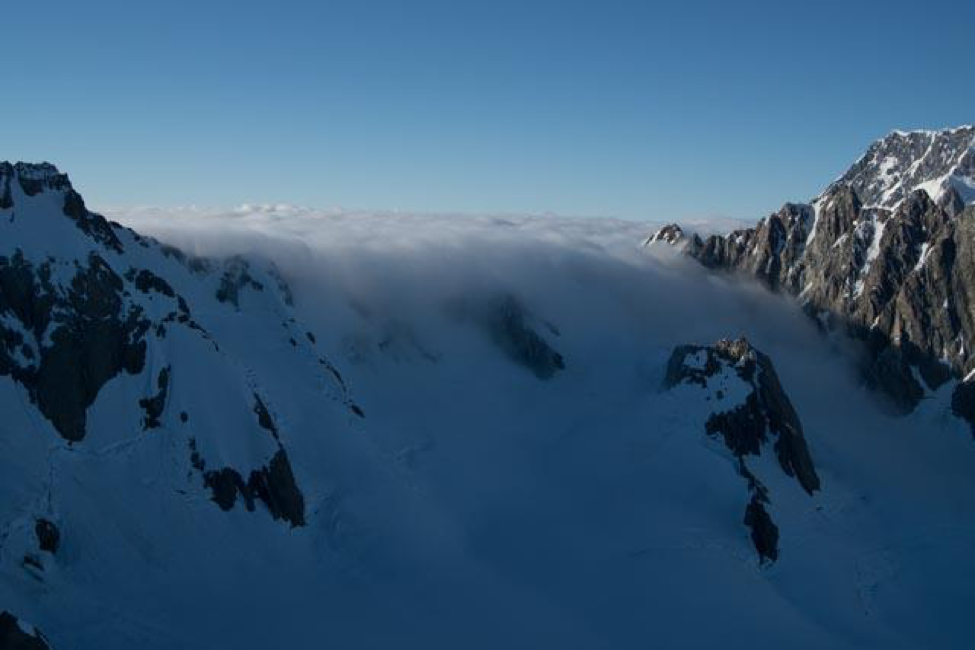 Ironically, where gliding is sublime there are few birds to compete with.  NZ doesn’t have more than a few hawks in this area and while we were in the air we saw none.  Gliders in Peru have to contend with attacks from giant condors.  Larry and I both did two gliding sessions.  Each were between 2.5-3 hours. Larry learned all the mechanics of flying and flew unassisted with a pilot.  I just enjoyed the ride!

People come here from all over the world to complete their bucket list.  The only requirement is to weigh  under 110 kg (242.5 lbs)! 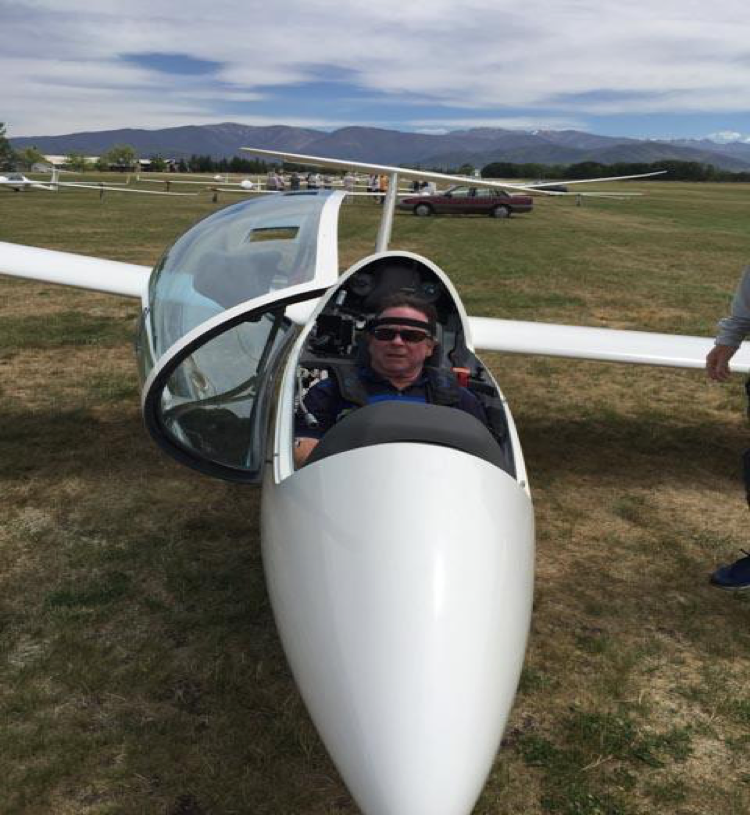 You can check out some of his video if you select the link at the bottom of this email.  In Larry’s flights he was constantly exchanging speed for height.  Go fast and you head toward the ground, go slow and you head up into the clouds.  A constant balancing act.  More than once Larry’s glider and my glider passed close enough to each other that we could wave.  Not bad for 10,000 feet in the sky and each cruising at 60 knots

You can check out one of our videos here.