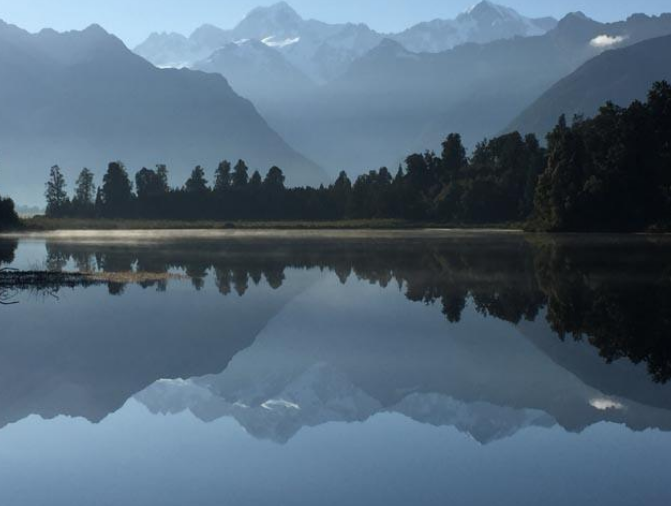 Larry wanted to do a “doors off” private helicopter photo shoot ever since reading Tripadvisors long list of complaints about NZ’s helicopter rides.  Typically, the helicopter is packed with people.  They position you by weight so there is no guarantee you won’t be stuck in the middle looking at the back of someones head and filming through the plexiglass.   We planned to be in Fox Glacier for three days just to insure one day would be great for seeing the mountains.   In fact, it is likely the helicopters won’t fly because cloud cover is common on the west coast.  We figured if we were going to the trouble of renting a private helicopter we might as well have the door off so Larry would have no glare from the sun reflecting on the plexiglass.  Larry had to wear a special harness to keep him in the helicopter.  We both had to dress for colder weather as it got pretty breezy in there. 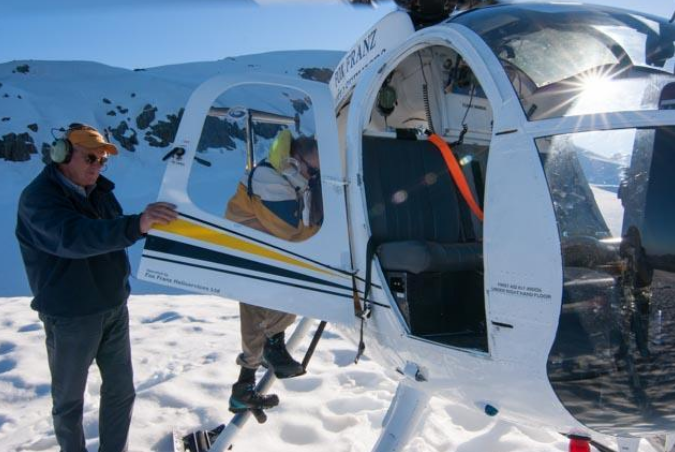 Naturally, our three days were all sunny.  Also, as luck would have it, by requesting doors off, we ended up with one of the best helicopter pilots in NZ.  You may be picking out a theme in our notes that flying is dangerous.  Turns out that our pilot, Colin Tuck,  has survived three life-threatening mechanical failures (one was a fire).  It is good to know your pilot will be cool-headed in an emergency.  He took us up to Mount Cook, both Franz-Josef and Fox Glaciers as well as his personal favorite “marshmallow” part of the glacier.  We also landed on the glacier. 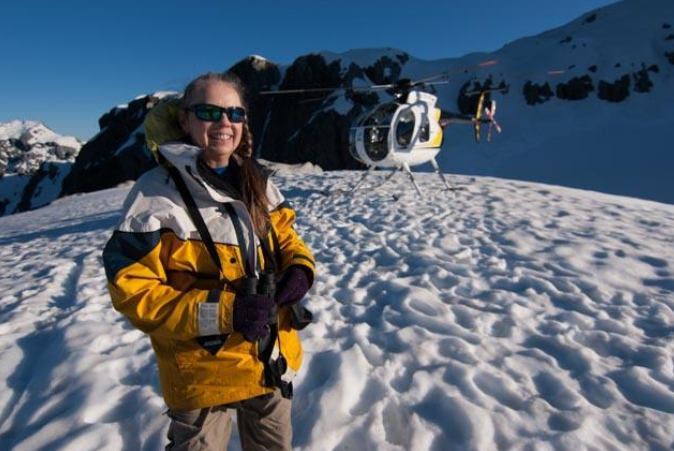 Colin was great at positioning the helicopter so Larry could get just the right shots.

It was interesting seeing the changes in the snow from the tops of the mountains where it looks pristine.  You can just make out two climbers trekking almost to the top. 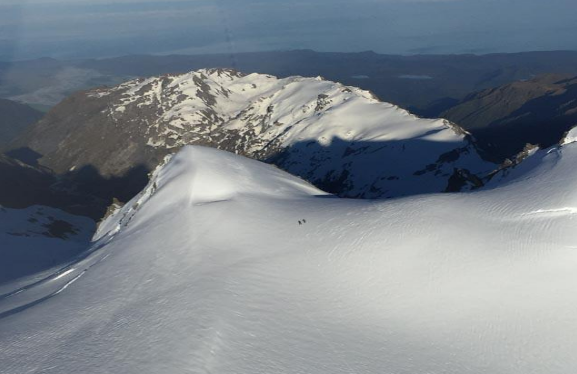 The West coast was clear the day we flew but you can see the solid clouds ready to flow over the peaks.  Our flight was at 7 AM. By noon, the peaks were lost in the clouds and there was nothing to see from the air. 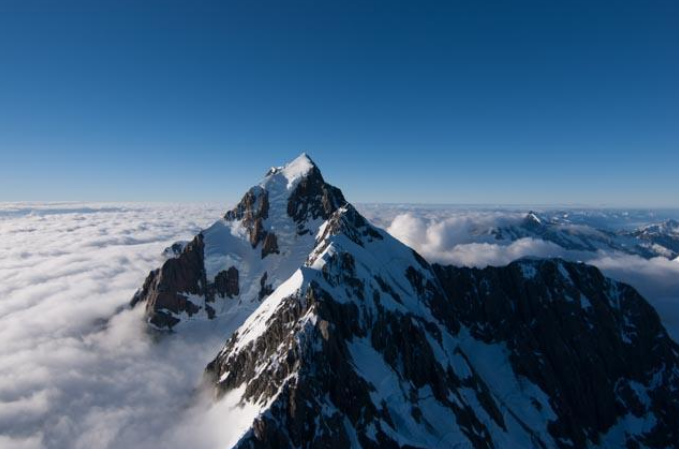 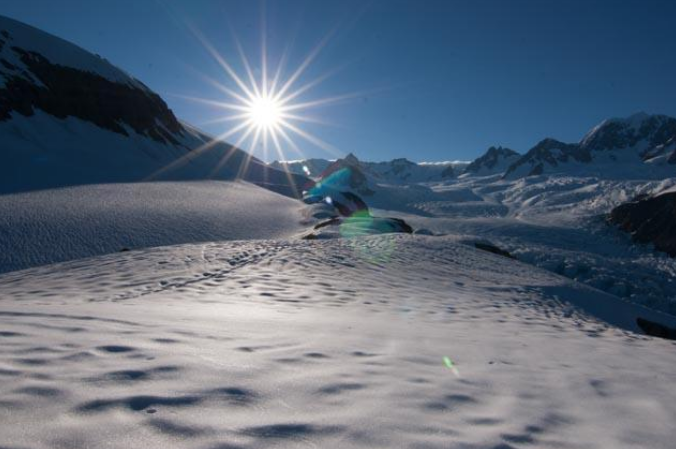 Further down the slopes, fissures form in the snow and as more pressure pushes on the sides of the glacier and you get these interesting marshmallow shapes.  Each one is the size of a two-story house. 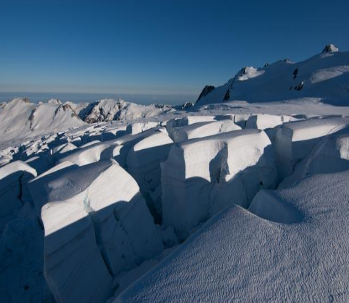 At the ragged ends of the glacier you get jagged dirty tailings.

A decade ago it would have been possible to view the glacier in the midst of the forest but global warming has the glaciers in retreat since 2009.  Because of this, the most significant sights are the streams of melting glacier creating waterfalls that are flowing underneath the glacier. 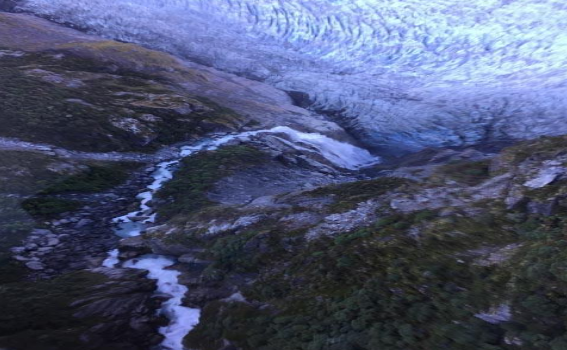 Since we had a couple of extra days we drove to Lake Mathas and I took the  “winning” picture. 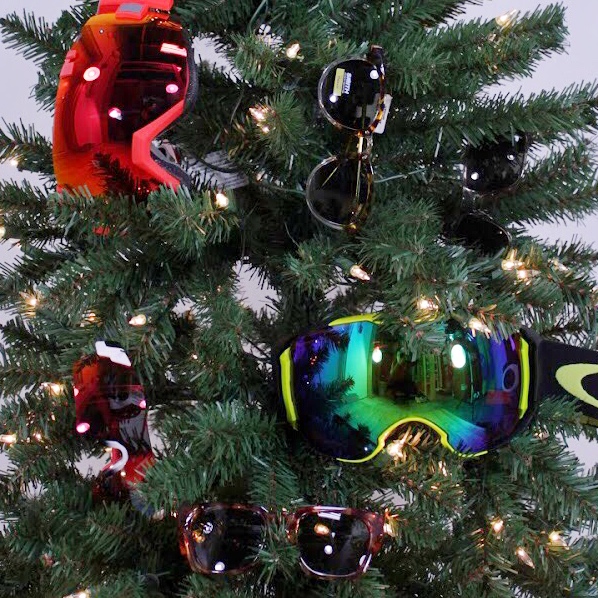